Shot peening is one of the methods used to improve fatigue strength inducing plastic deformation. In this study, shot peening effect is carried out to prevent stress corrosion cracking on water cooling hole and tested to analyze any benefit.

In the previous experiment, 1500MPa residual stress was induced on the inside of the water-cooling hole. Finally, extension of die life that was achieved by applying shot peening can be confirmed in actual production.

The die-casting method enables the mass production of high-strength, high-precision products at low cost. For this reason, it is used in many industries especially aluminum alloys for automotive parts due to high strength and lower weight of these alloys. 1)

In recent years, the thermal capacity of die casting dies increased due to the increasing size of die casting parts being cast.  As a result, quick cooling is required for product quality.  Quick cooling can help reduce costs by shortening cycle time.

The main failure point is toll cracks that is caused by heat checking on die casting die. These cracks will initiate at the boundary of crystal grain due to thermal stress and repetition by molten aluminum alloy. The recent problem is destructive to the water-cooling hole to cool the die-casting die. Generally, dies have holes drilled into them and the holes are filled with water after casting to help accelerate cooling.  The distance from the cavity’s surface to the water-cooling hole surface has become closer in order to decrease cooling time.  Due to this condition, tensile stress occurs at the surface of water-cooling holes due to cyclic heat stress.  Die cast users have reported issues of Stress Corrosion Cracking (SCC). 2)

Drilling water cooling holes and passages is very difficult because the diameter is very small, and the depth is very deep. Therefore, the inside wall is covered with a tool marks.

The tool mark forms a notch and it becomes the stress riser point. Therefore, it can be supposed that these become the factor in production of cracking.3)4)5)

Shot peening is one of the surface enhancement methods available to improve fatigue strength of metal parts due to inducing compressed residual stress. Stress corrosion cracking can be prevented with reduction of tensile stress. Therefore, this test was devised to determine if it is possible to prevent stress corrosion cracking by introducing residual stress utilizing the shot peening process.

In this research, we investigate how to use shot peening to increase residual stress in order to prevent stress corrosion cracking in the water-cooling hole of die casting dies.

In this research, the experiments are divided into two parts. Most die casting dies are nitriding after heat hardening and annealing. So, it is very hard material. The shot peening process inside the diameter of a long, thin hole in such a hard material is very difficult. At first, maximum residual stress is investigated on the material of die casting die as a pre experiment.

The target residual stress value on the inside of the water-cooling hole will be determined by pre experiment.

SKD61 hot working steel is chose for the specimen. It is typical steel for die casting dies. Table1 shows the chemical composition of the specimen. Specimens were heat hardened and nitrided.

Direct pressure shot peening equipment was used for experiment. 0.1MPa～0.4MPa air pressure were selected. Coverage is over 100%. Table2 show the hardness of shot media that was used in this experiment.

The shot peening carried out to the entire surface of the hole, which had a diameter of 5mm. The length of passage is 40mm.

After shot peening, residual stress, micro vickers hardness of the inside wall of cooling hole were measured. The compressive residual stresses was measured with the sin2θ-ψ method using X-rays. Table3 shows condition of X-ray measurement apparatus. 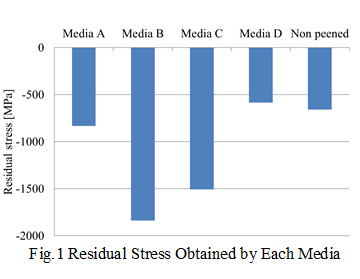 Shot peening should be applied to the top and entire inside diameter surface of hole. Therefore, a rotating nozzle with a ricochet plate was developed. 6)

Fig.2 shows dimension of the specimen. Specimens are made of SKD61 which is the same material used for the pre-experiment. Nitriding was applied and was the same as the specimen of the pre experiment. After shot peening, the specimen was cut by a  micro cutter in order to measure the residual stress. 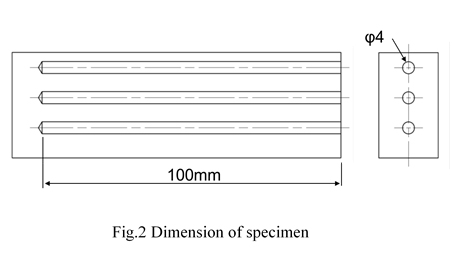 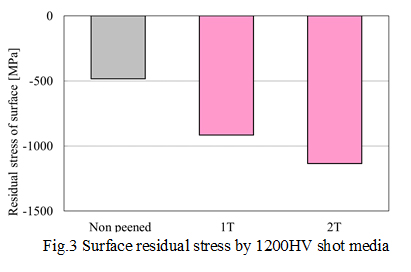 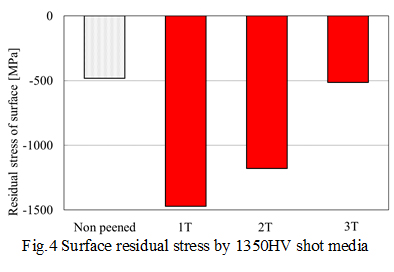 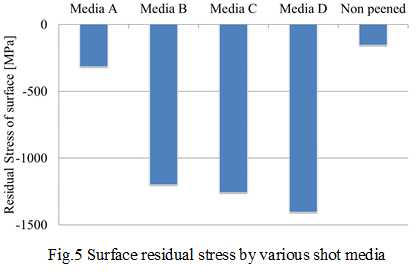 Fig.5 shows the surface residual stress of inside of the hole. The shot peening parameters were optimized for both the shot and media such as air pressure, flow rates, etc. Maximum residual stress is obtained when the highest hardness media was used.

Water cooling holes are thin and long, which makes it difficult to drill. In such cases, tool marks often remain on the surface after drilling. The tool mark may become the stress riser point that is caused by a cyclic heat change. Evolution of the tool marks are evaluated by photograph.

Specimens with a 5mm, 8.5mm, 11.5mm diameter hole were prepared for tool mark evaluation. The material is same as previous experiment.

Fig.7 shows photograph of inside of the water-cooling hole that was used in actual production. Both dies used same number of cycles. The non-peened die was judged to require replacement. In addition, the shot peening performed was limited to areas where it is indicated in the photograph. In the case of the non-peened hole, a large crack developed. In the case of the shot peened hole, multiple small cracks developed on the surface where shot peening was applied. But the big crack appeared at non peened area. Therefore, some effect of shot peening is recognized. 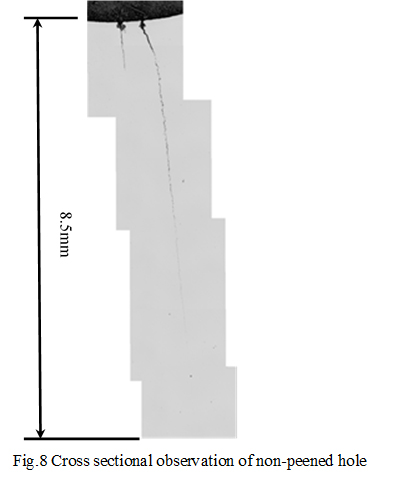 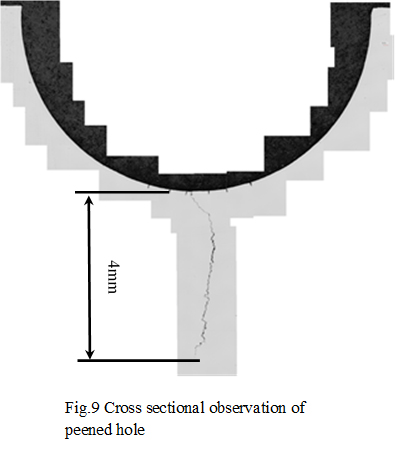 ・-1500MPa residual stress can be induced on the surface of water cooling hole that was heat hardened by shot peening.

・Increased die life as a result of shot peening can be confirmed in actual production.